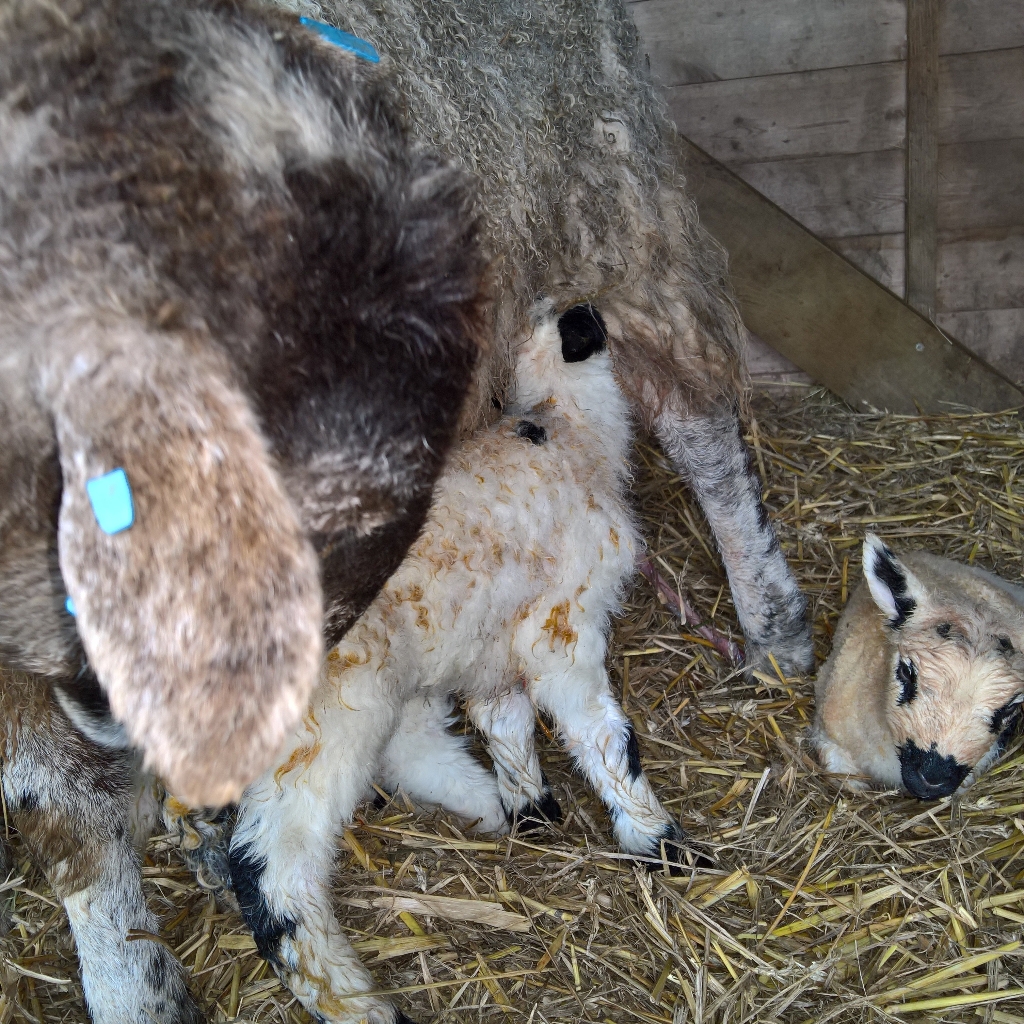 Well here we are 1 week into the 2016 lambing story and I am happy to report that things are going pretty well so far, always things to worry about but so far so good.

Much to our surprise it was the pedigree Kerry Hill that got the ball rolling on Tuesday 22nd March, she was the least pregnant looking ewe in the flock but still produced 2 fine healthy lambs just after dark out in the field on her own. All efforts to lure her into the shed for the night by moving her lambs ended in failure, these Kerry Hill sheep are ridi 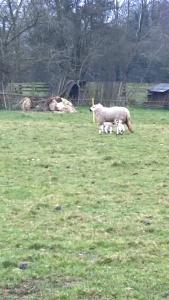 culously flighty, so we reunited ewe and lambs in the field and left them alone.

The girls with red dots then started to produce twins without any major dramas over the next few days, generally keeping to one sheep in labour each morning or evening. We had some big lambs born on Good Friday, so

big they needed a bit of help and made me initially think it would only be one but this ewe was big and strong and therefore out popped twins. At this point we had 4 ewes each having produced twins so our official productivity score was 200% and no major drama apart from the gazebo based maternity unit not getting on with the wind and destroying itself.

After a quiet Saturday and all seeming well on Sunday morning I disappeared off to Sunday Dinner Club at my mums for Easter Sunday. I love this emerging family tradition and it was great to see nearly everybody. A quick visit to the field Sunday evening and we were treated to the amazing Oswald’s delivering not twins but triplets down in the shed, wow. They all seemed strong so we decided to leave them with the ewe and monitor closely the next day. 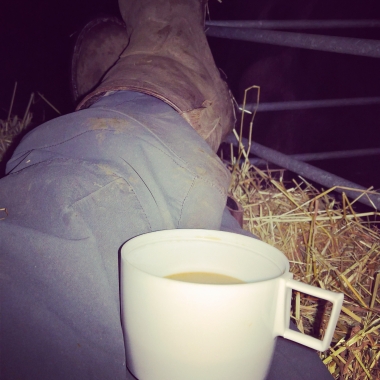 Easter Monday then happened. Things started badly with a dead lamb found out by the fence, no obvious reason for death and we just have to accept that this happens. My sickly sheep from a week earlier who was still pretty skinny but otherwise healthy was then seen wandering round the field bleating as if she couldn’t find her lamb, since she had not yet given birth this was noted by this trainee shepherd as just a little bit strange. I watched her for a little while and then all of sudden she just lay down on the ground and proceeded to give birth incredibly quickly to another set of triplets. That meant the shed needed to be re-configured to house 2 lots of ewes and triplets but as you can see from the title picture all seemed well.

During that afternoon the other Kerry Hill ewe wandered off on her own and was clearly in labour. I patiently got as close as possible to her and could see fluid sacks protruding from her back end but things seemed to be stalled. After leaving her another 90 minutes to make progress I was worried about a mal-presentation problem and she needed help. The ewe did not agree and proceeded to lead 4 grown adults in a merry dance around the field to try to catch her. Unbelievable comedy sketch material if anyone had a camera including my Basil Fawlty style antics, throwing sticks and shouting “just let the fe^$%er die then”.

We finally caught her and time really was pressing now, the lamb had a leg stuck backwards and would not come out without a fight, by the time it was out we were sure it would be dead but sometimes life can surprise us all. After a major resuscitation effort the lamb was awake and breathing, the Kerry Hill did a runner, understandably given the wrestling match we had just had, and left us with a perfect ram lamb. We fed him some colostrum and just hoped that the ewe would settle down to have a second one and give us a chance to reunite the family. Thankfully this all unfolded an hour later and the ewe was tricked into a pen for the night and has since taken on parental duties for both lambs.

So a relaxing day off work for a bank holiday turned into a frantic life and death struggle from waking in the morning through to a whisky after dark. But all is good with 15 lambs currently alive from 7 ewes and just 4 more to go.

One thought on “Mid-way Lambing Update”